Without action to reduce emissions, Athens’s hottest days are projected to become three times more frequent by 2050—from nine to ten days in a typical year today to twenty-seven by 2050.

Considering only Central Athens, heat-related output losses from labor productivity are projected to more than double from almost USD 100 million in a typical year today to USD 230 million (EUR 213.7 million) in 2050. These losses are likely to affect workers through reduced wages or income. Construction, manufacturing, and public-sector workers suffer outsize losses relative to the size of their sectors, due to a combination of lower levels of active cooling (AC) coverage and higher labor intensity.

The risk of local wildfires, already a serious local hazard, is exacerbated by and compounds the effects of heat waves, creating a dangerous feedback loop.

To protect its economy and its population, Athens can scale up a range of measures aimed at providing cooling facilities in its historic center, strengthening worker protection, and improving heat awareness among its most vulnerable residents.

Heat-related output losses from labor productivity are projected to increase from $100 million today to $230 million by 2050.

The climate of Athens1 is characterized by warm summers punctuated by extreme heat waves, and temperatures are rising. Already, the ten hottest days in Athens in a normal year have an average daily temperature (over twenty-four hours) of above 29.2°C, capturing both warmer evenings and daytime peak temperatures, with highs of 48°C recorded in recent years.2 Without global action to address climate change, the number of such extremely hot days is projected to triple to nearly thirty days every year by 2050. Athens’s Mediterranean climate, where hot summers follow cool winters, may make it more challenging for people to adapt to rapid changes in temperatures compared to people living in equatorial climates with warm weather year-round.3

Athens’s dense urban core allows relatively little space for parks or tree canopy cover to shade buildings and roads, raising temperatures in urban heat islands (UHI) throughout the city. Most of the population lives in the core of the city, which is dominated by built-up space that traps heat and leads to warmer temperatures than the surrounding countryside. The urban heat island hotspots in the center of the city are likely to intensify with climate change and to continue to spread out as the city develops further into the mountainous suburbs. Without action to limit emissions or adapt to the changing climate, by 2050 the hottest spots through Central Athens may reach temperatures as much as 15°C hotter than rural areas are today.4

Output losses due to heat-related worker productivity reductions in Central Athens alone are now valued at $98.4. This will rise to $230 million by 2050.

Output losses due to heat-related worker productivity reductions in Central Athens alone are valued at around almost USD 100 million (USD 98.4/EUR 91.4 million)5 in a typical year today to USD 230 million (EUR 213.7 million) by 2050.6 These losses are assessed over the four regional units of Central Athens, home to almost two-thirds of the population of 3.7 million in the wider metropolitan area, and do not include costs to health, infrastructure, and tourism demand, or indirect impacts to the broader economy. By 2050, without emissions reductions or further adaptation, losses from lost worker productivity due to extreme heat and humidity may amount to 0.3% of Athens’s projected 2050 output. More than half of the expected increase in output losses is due to increasing effects of climate change, and the remainder due to growth in economic output.7

Construction, manufacturing, and public-sector workers suffer outsize losses relative to the output of each sector, due to a combination of lower levels of AC coverage and higher labor intensity. Losses in logistics and public services each exceed USD 27 million (EUR 25.1 million), almost 30 percent of total losses in a typical year around 2020.8 This is due to the size of the logistics sector and its workers’ relatively high exposure to heat in occupations such as truck driving or warehousing; while workers in public-service roles such as teachers or police officers on average have better access to workplace active cooling, the greater reliance on human labor to generate output means that a smaller amount of heat stress has a greater impact. Highly vulnerable sectors such as construction and manufacturing face proportional losses twice as high as the logistics sector, but constitute a smaller share of the economy of Central Athens. A wider analysis of the Athens metropolitan area would include more of these vulnerable workers, resulting in higher percentage losses. 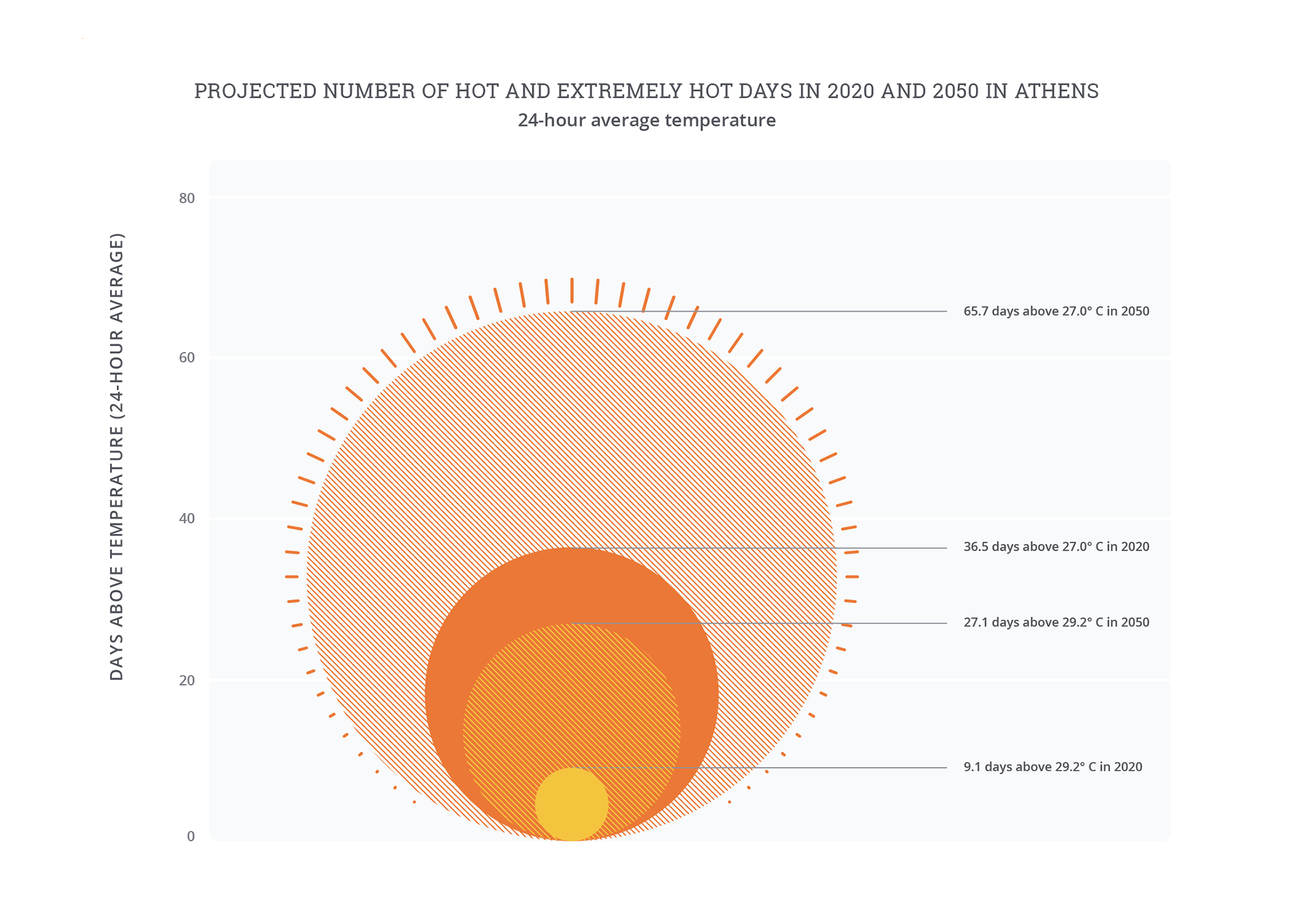 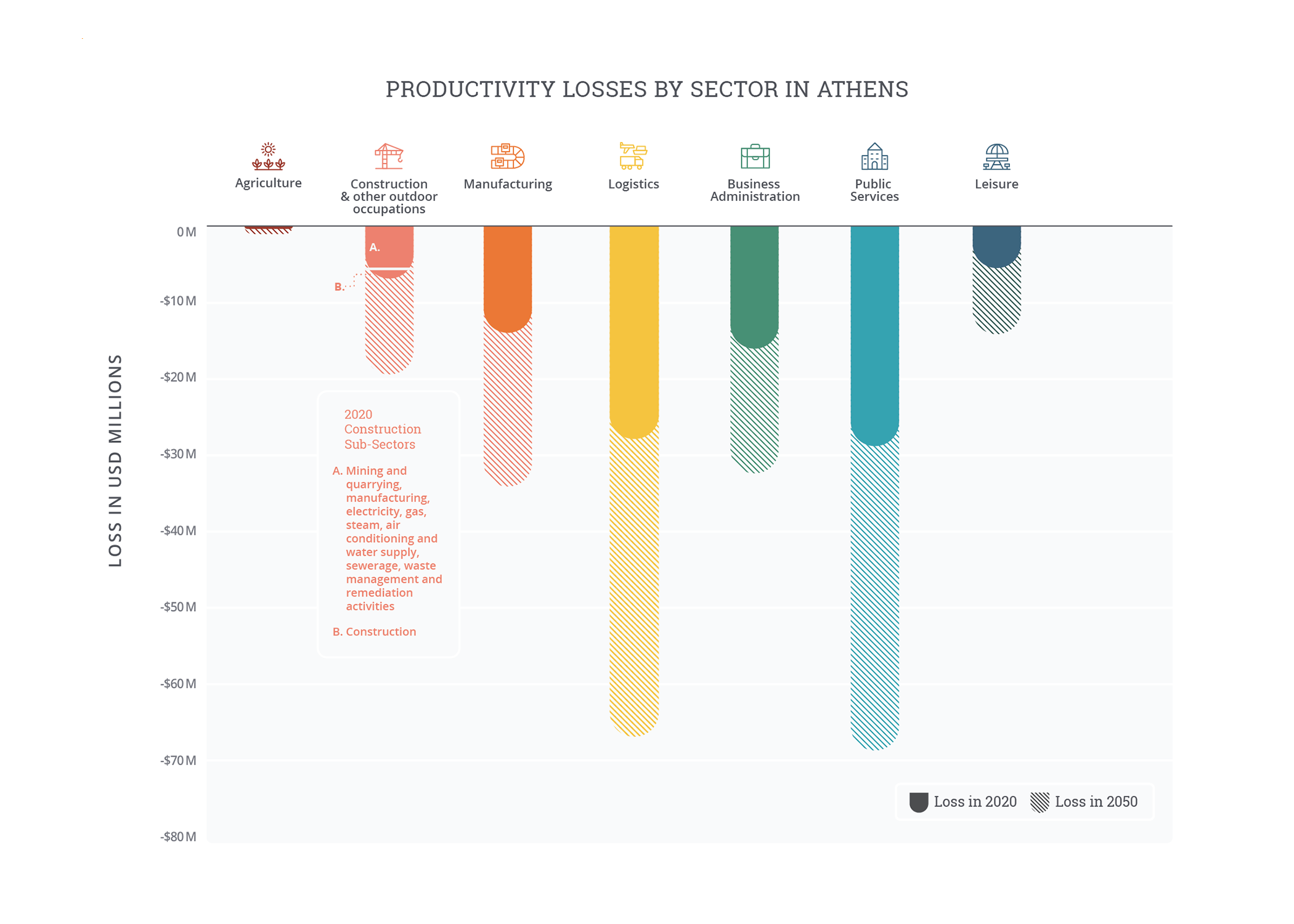 Note on “Productivity losses by sector”:9 The agricultural sector captures loss within the defined city limits and does not account for agricultural loss from the surrounding rural areas. Baseline losses are based on historical climate data from 1985-2005 and economic data from 2019. 2050 losses are based on the 2040-2060 climate projection from an ensemble of CMIP6 models under RCP 7.0 and economic models under SSP3. Losses assume no change in sectoral composition of economy. Source: Vivid Economics.

Athens suffers not only from extreme heat but also from wildfires, and the two can compound each other in a vicious cycle. High temperatures can make wildfires more severe—evidence from California suggests that a 1°C increase in the daily average summer temperature increases fire risk by 19 to 22 percent10—while wildfires can prevent people from adopting cooling strategies, increasing the impact of heat.

The city of Athens is leading efforts to reduce heat exposure and the vulnerability of its population. Continued efforts are required to tackle the rising temperatures across the city’s public and private spaces. Ongoing initiatives include:

With extremely hot days set to double, even quintuple by 2050 in the Global South, this research quantifies economic and social impacts of heat in cities across the globe. This city report takes a closer look at the impacts of heat on the economy of Bangkok.
Read More

1  The economic impacts assessed here reflect the four regional units of Central Athens, North Athens, South Athens, and West Athens, and do not include productivity losses related to work within Piraeus or other parts of Attica. Some supporting research in this report goes beyond political boundaries to give a sense of how extreme heat and humidity impact Athens’ influence area.

2 All analysis is based on RCP 7.0 and SSP3 using an ensemble mean of CMIP6 models, and the accompanying methodology document provides details; and National Observatory of Athens, http://magazine.noa.gr/archives/4446.

6 Workability analysis is based on climate factors and not indoor working conditions determined by built environment characteristics or workplace layout (e.g., equipment that generates heat, body heat in close spaces, ventilation or greenhouse effects from windows, external shading). In practice, some of these factors can make indoor environments hotter than the modeled climate conditions suggest.

7 Economic growth is projected to be relatively modest for Athens under SSP3 assumptions; see methodology for further details.

8 Economic data in this report are from 2019 to avoid capturing the effect of COVID-19 on the economies of the cities analyzed; see methodology for further details.

9 The economic impacts assessed here reflect the four regional units of Central Athens, North Athens, South Athens, and West Athens, and do not include productivity losses related to work within Piraeus or other parts of Attica.