High temperatures and humidity leave many in Dhaka exposed to dangerous weather conditions. For the ten hottest days of a typical year, the apparent temperature (considering both heat and humidity) is hotter than the human body.

The highest worker productivity-related economic losses from the heat are felt by those least able to bear them. In sectors such as garment manufacturing, transport, and retail trade, where wages can be lower than average, losses already amount to around 10 percent of income.

Heat is concentrated in some of the city’s poorest districts. In Kamrangirchar, a district containing a high concentration of informal settlements with widespread use of corrugated iron sheet roofing, temperatures are typically 12°C higher than Dhaka’s surroundings.

The population of Dhaka is developing innovative individual solutions to adapt to the heat, but the magnitude of the problem calls for a rapid scaling up of activity to protect the city’s residents and economy.

In Dhaka, heat stress impairs labor productivity more than any other city in this study, with losses valued at 8 percent of output under baseline conditions, rising to 10 percent by 2050 without action to reduce emissions or adapt.

Despite the already high temperatures and humidity of between 60 and 80 percent in Dhaka,1 climate change is set to make things substantially worse. In a typical year, the ten hottest days see average recorded temperatures greater than 30°C, which given local humidity feels warmer than the human body. There is little respite during the night, with overnight lows regularly over 25°C, making it difficult for people to cool off and recover from high daytime temperatures. Without action to reduce emissions, conditions will worsen substantially: by 2050 current extremes are projected to become more than twice as common.2

Heat in Dhaka is concentrated in its urban core, including some informal settlements. Dhaka is subject to a strong urban heat island (UHI) effect due to its population density and lack of green space. Large and widespread hotspots within the city are more than 10°C higher than the surrounding countryside.3

For example, in Kamrangirchar, population density and the widespread use of corrugated iron sheet roofing in buildings means that outside temperatures are typically 12°C higher than the city’s surroundings, while temperatures experienced indoors are even hotter. These living conditions contribute to substantial health risks for Dhaka’s population, which will only increase as temperatures rise further. Without action to reduce emissions or adapt, changes in temperatures as well as impacts from vector-borne diseases and air pollution are expected to worsen these conditions.4

In Kamrangirchar, population density and corrugated iron sheet roofing in buildings means that temperatures are typically 12°C higher than nearby areas.

Extreme heat and humidity cause labor productivity-related losses greater than 8 percent of annual output generated in Dhaka today5—and by 2050 this could increase to 10 percent.6 This is the highest share of losses of any city in this study: while others such as Abu Dhabi and Bangkok are more exposed to heat stress, Dhaka is unusually vulnerable to its effects, due to its labor-intensive economy and low rate of active cooling. Labor productivity causes output losses under current conditions that amount to around USD 6 billion (USD 5.9 billion/BDT 518 billion)7 in a typical year—comparable in real terms to estimates of the total economic losses to the whole of Bangladesh from the one-in-a-hundred-year flooding in 20048—rising to USD almost 12 billion (over BDT 1 trillion) by 2050 without adaptation, using conservative growth assumptions. These losses capture only direct impacts on output, but the lost wages and output also have indirect effects on the wider economy as overall spending declines and affects even economic activity that is not exposed to heat. 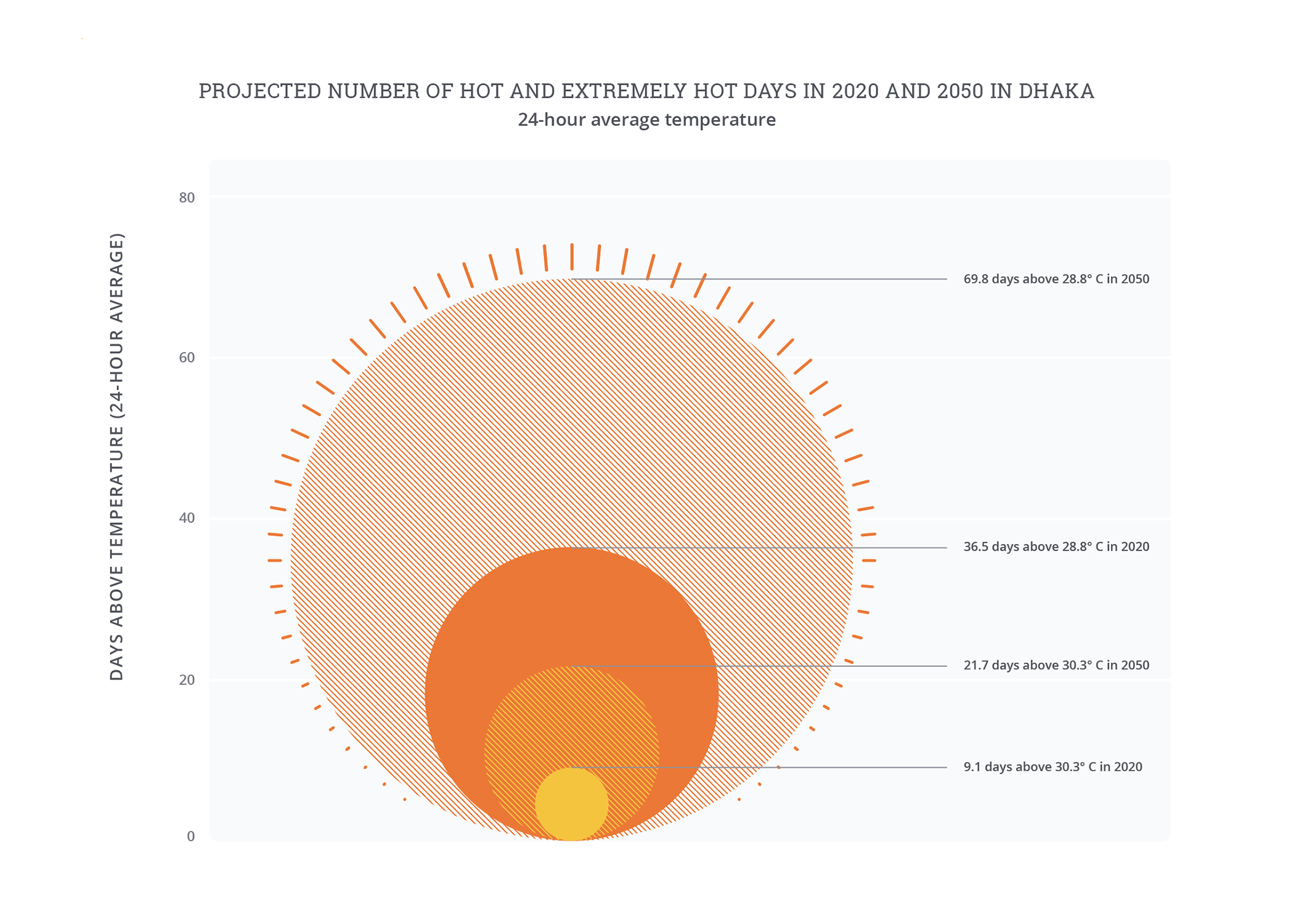 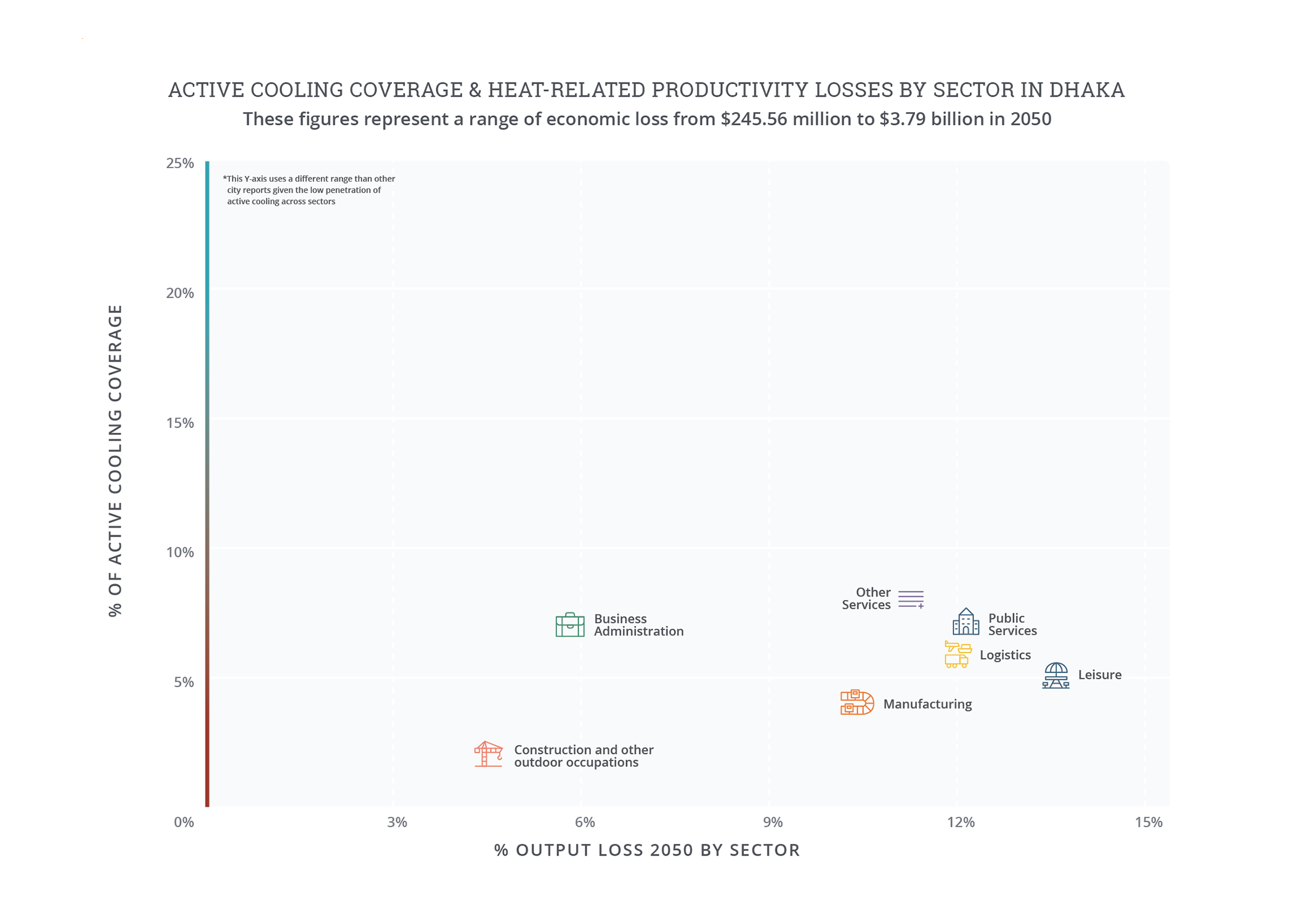 Informal retail employment occupies an important social space in Dhaka. One estimate by the Bangladesh Hawkers Union suggests as many as 400,000 informal street vendors (“hawkers”),10 who often are migrants seeking low-skilled employment in the city. The density of the built environment means hawkers rarely have permanent shops and instead set up shop on sidewalks, immediately beside roads whose surfaces can reach 60°C and where dense traffic continues to generate heat into the evening hours.11

Recognizing the vulnerable position of these workers and the mounting risk of their heat exposure, the Red Cross/Red Crescent and Bangladesh Meteorological Department recently trialed a forecast-based financing (FbF) intervention for heat waves in Dhaka that disbursed cash to support these and other vulnerable workers who were unable to work safely in the extreme heat.12 Some hawkers surveyed before the start of the project indicated they lost as much as 50 to 75 percent of their earnings (9 percent of respondents) during heat waves, while more than one in four lost between 25 and 50 percent of their earnings. In the trial, 81 percent of participants said that the cash grant played a key role in supporting their families during the heat wave.13

The people of Dhaka have long lived with extreme heat and have developed innovative adaptations. However, the magnitude and expected increasing severity of the problem calls for a rapid scaling up of activity to protect the city’s residents and economy. Actions in progress include: 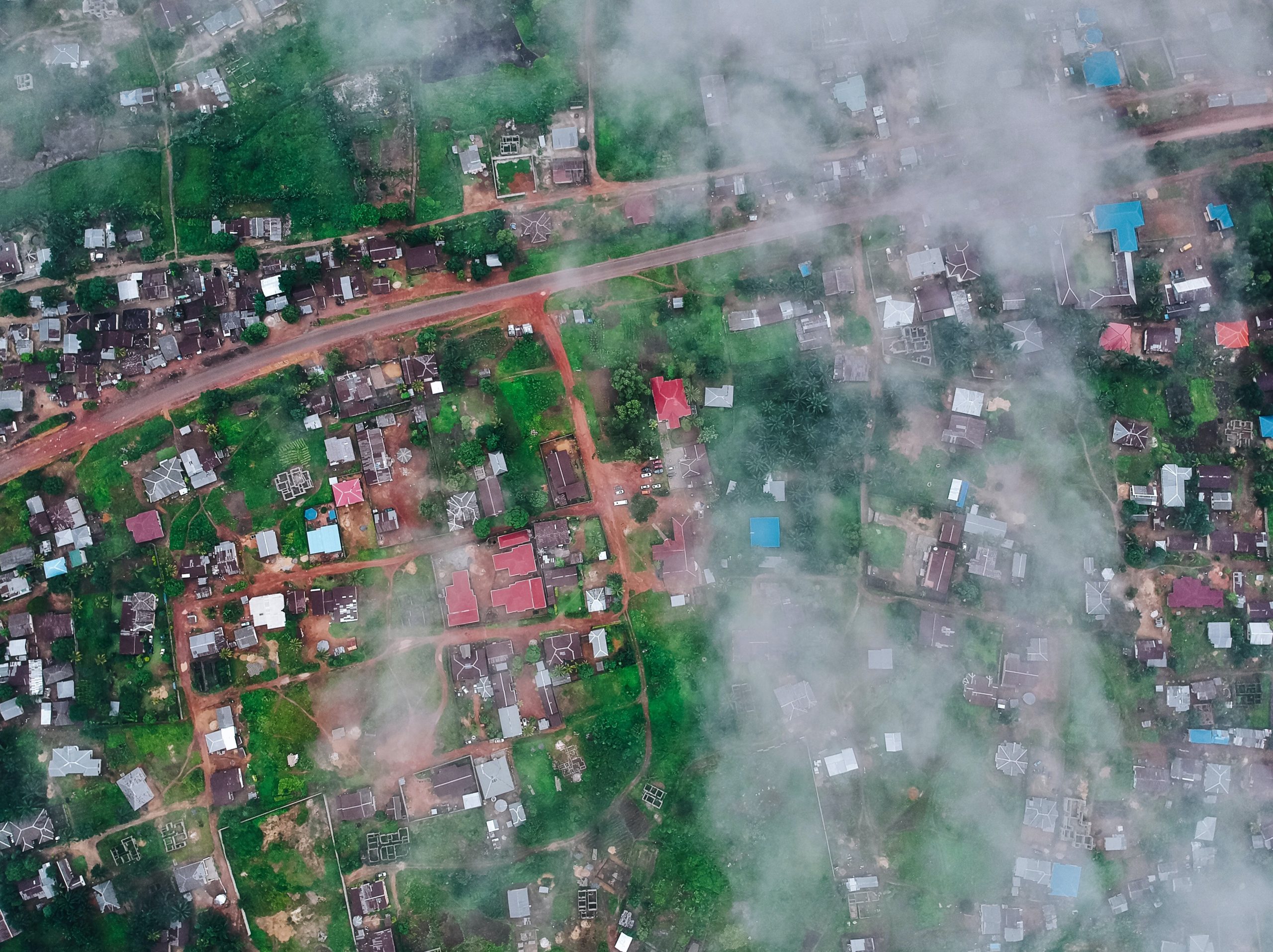 With extremely hot days set to double, even quintuple by 2050 in the Global South, this research quantifies economic and social impacts of heat in cities across the globe. This city report takes a closer look at the impacts of heat on the economy of Buenos Aires, Argentina.
Read More

1 To estimate economic losses, this study goes beyond political boundaries to give a sense of how extreme heat and humidity impact Dhaka’s influence area. Core economic modeling considers the Dhaka metropolitan area. The regional approach is to ensure that analysis covers populations that are central to Dhaka’s growth and urban trajectory.

2 All analysis is based on RCP 7.0 and SSP3 using an ensemble mean of CMIP6 models; see accompanying methodology document for details.

5 Economic data in this report are from 2019 to avoid capturing the effect of COVID-19 on the economies of the cities analyzed; see methodology for further details.

6 The workability analysis is based on climate factors and not indoor working conditions determined by built environment characteristics or workplace layout (e.g., equipment that generates heat, body heat in close spaces, ventilation or greenhouse effects from windows, external shading). In practice, some of these factors can make indoor environments hotter than the modeled climate conditions suggest. All output is measured based on gross value added (GVA), or the value of goods and services produced in an area.

11 Mohammad Asaduzzaman et al., “Heat and Carbon Emission due to Vehicle Traffic in Dhaka City,” Transylvanian Review 27, no. 40 (May 2019), https://www.researchgate.net/publication/338213699_Mohammad_Asaduzzaman_et_al_Heat_and_Carbon_Emission_due_to_Vehicle_Traffic_in_Dhaka_City.

19 Mitigation Strategies for the Urban Microclimate of Dhaka Megacity to Reduce Adverse Climatic Change Impacts, Curtin University in collaboration with University of Dhaka and Bangladesh Institute of International and Strategic Studies, Report Submitted to the World Bank, April 2020, https://pubdocs.worldbank.org/en/930391591367799185/04-2020-04-30-Curtin-Univ-Final-Report.pdf.