Monterrey’s hot, semiarid climate makes it one of the hottest cities in Mexico. Temperatures are particularly high in its built-up urban core where green space is scarce: they are 5°C warmer than nearby rural areas and are projected to become 10°C warmer by 2050.

Heat- and humidity-related labor productivity losses in Monterrey are already causing economic damages in a typical year valued at over USD 1.8 billion (USD 1.81 billion/MXN 35.1 billion), on a par with losses from the worst natural disasters in the region, such as 2010’s Hurricane Alex. Without adaptation or global action to reduce emissions, this impact could double as a share of output by 2050, reaching USD 4 billion (USD 4.05 billion/MXN 78.6 billion).

Compared to other cities in this study, labor productivity impacts are concentrated in manufacturing, with two-thirds of the city’s overall losses falling in the sector. Controlling these losses, which are otherwise projected to grow from 0.9 percent to 1.5 percent of output by 2050, could involve moderating indoor temperatures through active and passive cooling as well as the uptake of technologies to reduce heat from machinery.

Adaptation in Monterrey has been driven largely by the private sector and nonprofit organizations investing in new designs for passive cooling; insights from these pilots can inform essential future heat-proofing investments under the direction of its newly appointed Chief Heat Officer.

Monterrey’s1 hot, semiarid climate makes it one of the hottest cities in Mexico, and temperatures are particularly high in its built-up urban core. The city has a record high of 48°C,2 and in recent decades daily average temperatures have exceeded 28.6°C for around ten days a year.3 By 2050, nearly forty days—over one month every year—are predicted to exceed this threshold, and the ten hottest days will have an average temperature of 30.1°C or hotter. Monterrey’s urban core is currently around 5°C warmer than surrounding rural areas, but further urbanization combined with climate-driven temperature increases are set to drive this figure to around 10°C by 2050.4 This is partially due to a low level of cooling green space for urban residents. There is just 3.9 square meters of urban green space per inhabitant in Monterrey municipality,5 compared to a commonly referenced target of 9 square meters of urban green space per inhabitant.6

Monterrey’s heat- and humidity-related labor productivity losses are already causing economic damages at a similar level to natural disasters in the region: without adaptation, this impact could double as a share of output by 2050. Monterrey has a higher share of active work, such as in manufacturing, than many other global cities, but has relatively low shares of outdoor work,7 particularly in its higher value sectors such as manufacturing, logistics, and business administration.

By comparison, Hurricane Alex, which has been called “the worst weather phenomenon” in Monterrey’s history,10 destroyed significant housing and transport, power, and water infrastructure in 2010, with damage repairs costing an estimated USD 1.3 billion to 2.1 billion (MXN 25.2 to 40.1 billion).11

Without enhanced adaptation, heat-related productivity losses are projected to increase to 1.5 percent of output by 2050. Even with conservative estimates of gross domestic product (GDP) growth, the absolute value of these losses could exceed USD 4 billion (USD 4.05 billion / MXN 78.6 billion).

Labor-related productivity losses are consequently higher relative to cities with more service-centered economies in similar climates. Manufacturing is estimated to account for 60 percent of Monterrey’s total output losses, valued at over USD 1 billion (almost MXN 20 billion). These losses could be higher if heat’s effect on the operation of machinery is considered: the compounding effect of heavy machinery in raising temperatures in the workplace can be seen in the below section on manufacturing workers. By 2050, a combination of climate change and GDP growth are projected to drive losses up to USD 2.4 billion (MXN 46.6 billion). 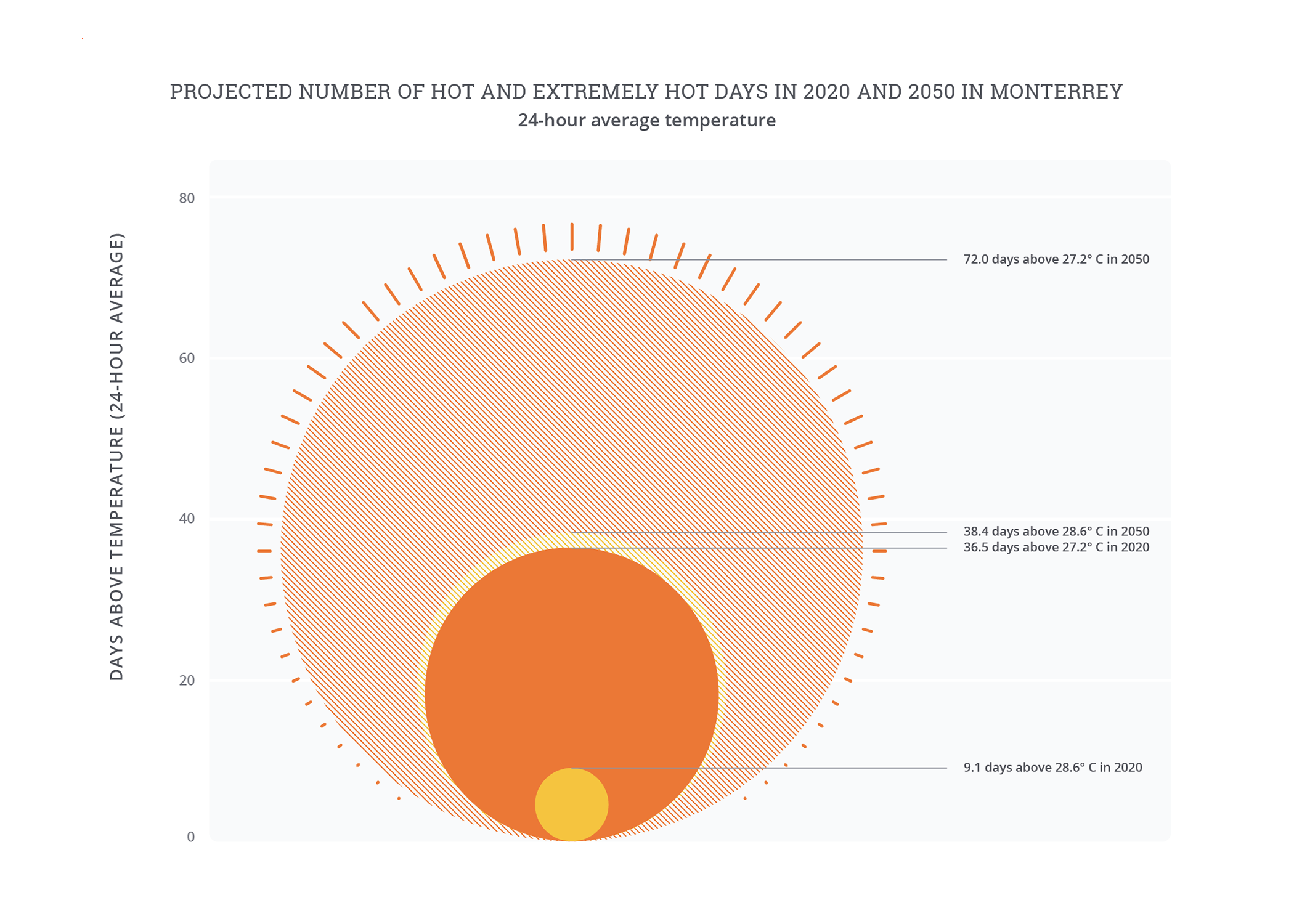 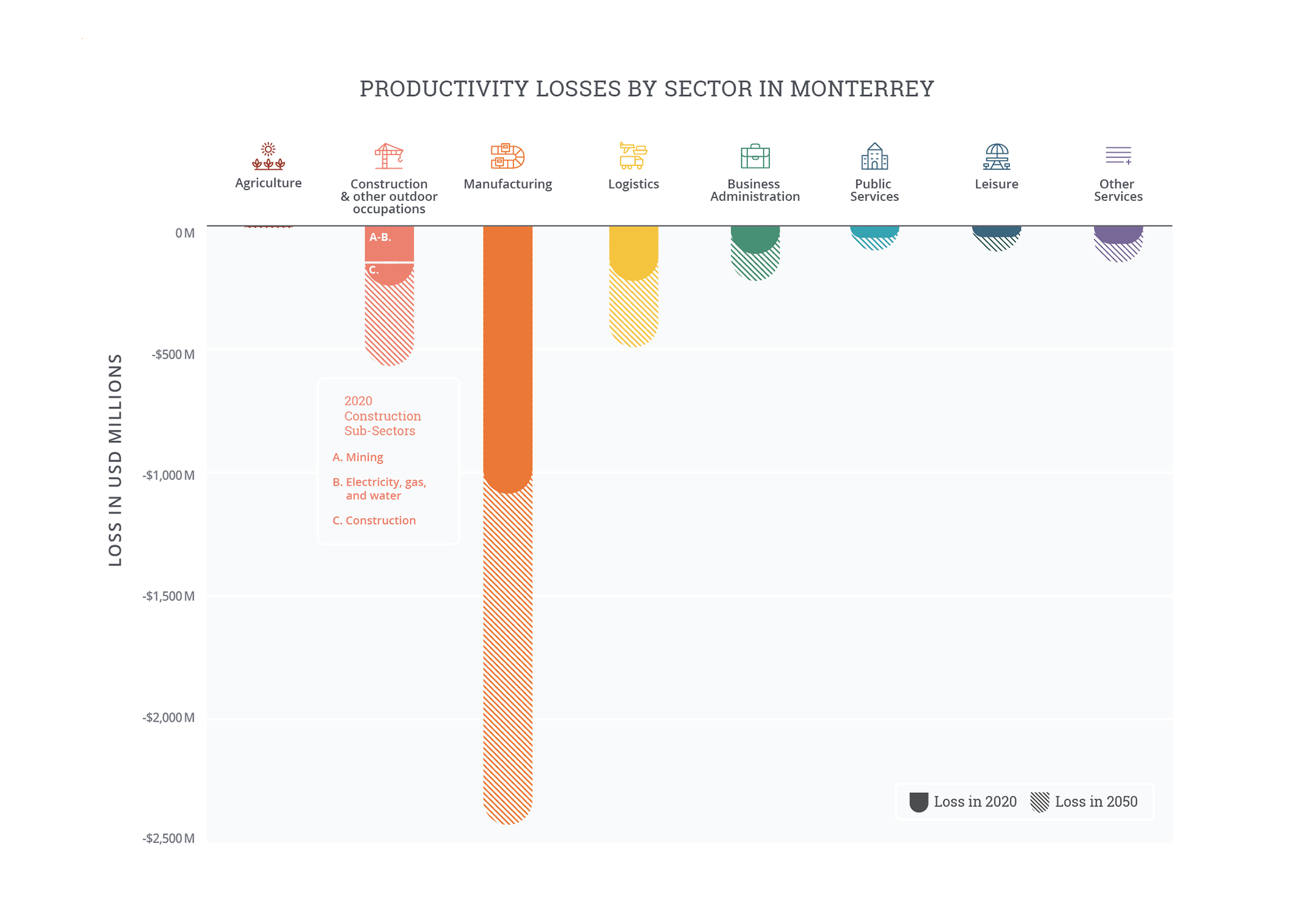 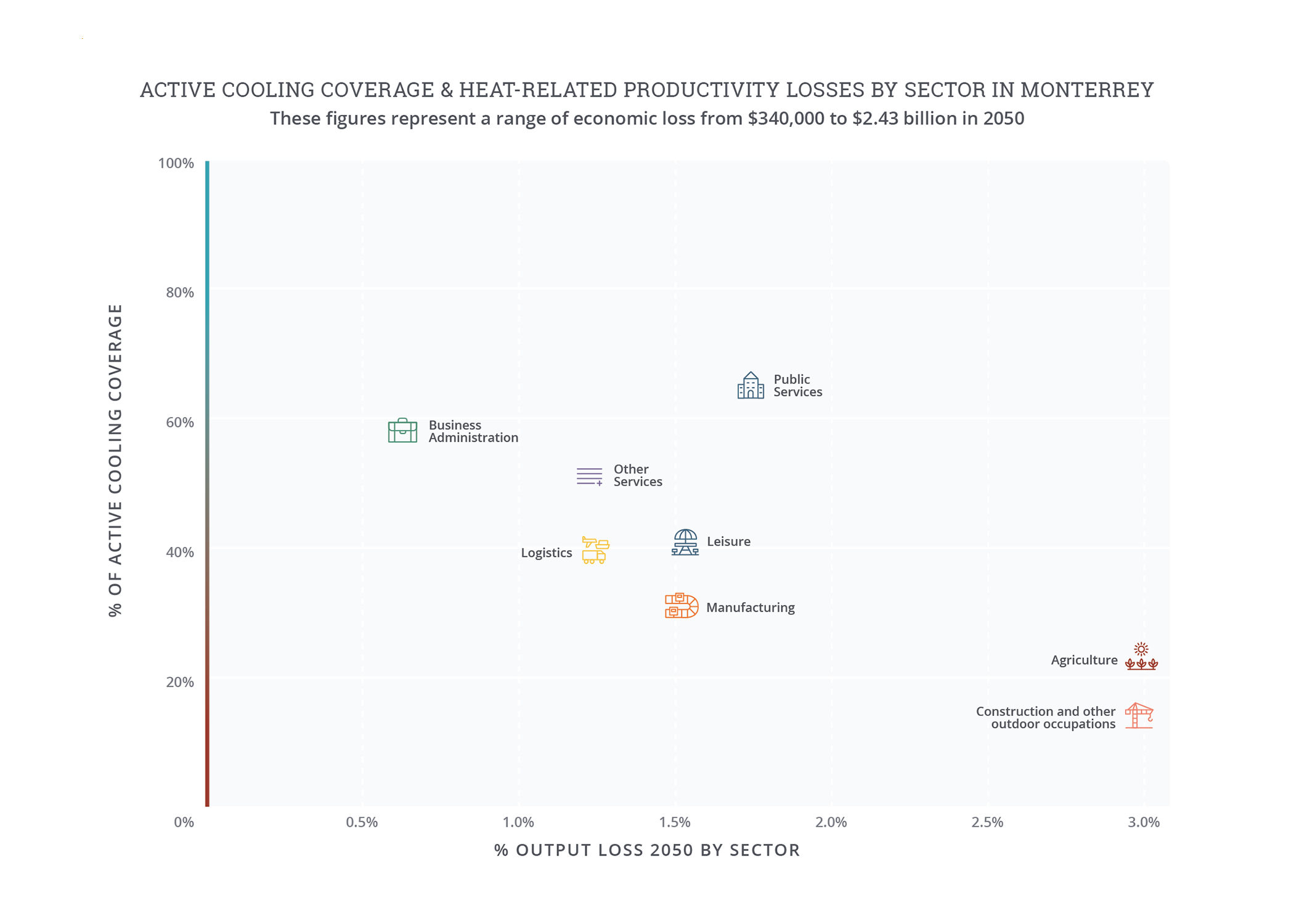 Monterrey is the manufacturing hub of Mexico, with key outputs including steel, automobiles, electricity generation, and electrical appliances. The 950,000 employees across this sector make up 29 percent of the city’s total workforce—more than double the number of people working in retail trade, the second-largest employment sector.14 While Monterrey enjoys relatively high levels of air-conditioning compared to the rest of Mexico,15 its high concentration of more physically demanding jobs results in higher heat stress for affected workers.

Private-sector investment and pilot studies for heat resilience are already underway in Monterrey and across Mexico. To reduce economic losses and protect its population, Monterrey can expand upon and scale up existing adaptations focused on making heat more bearable in urban environments, under the direction of its newly appointed Chief Heat Officer. Actions include: 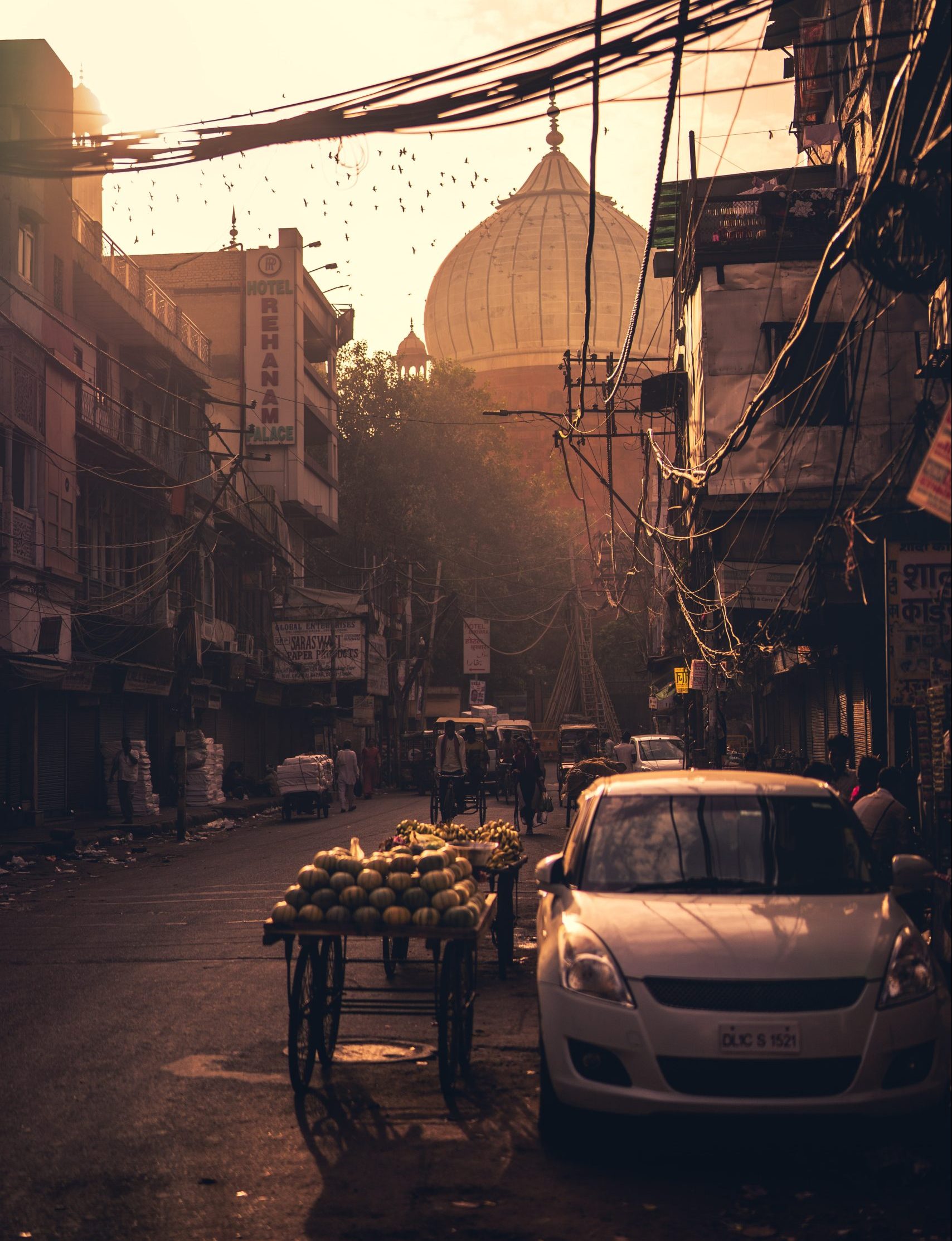 With extremely hot days set to double, even quintuple by 2050 in the Global South, this research quantifies economic and social impacts of heat in cities across the globe. This city report takes a closer look at the impacts of heat on the economy of New Delhi, India.
Read More 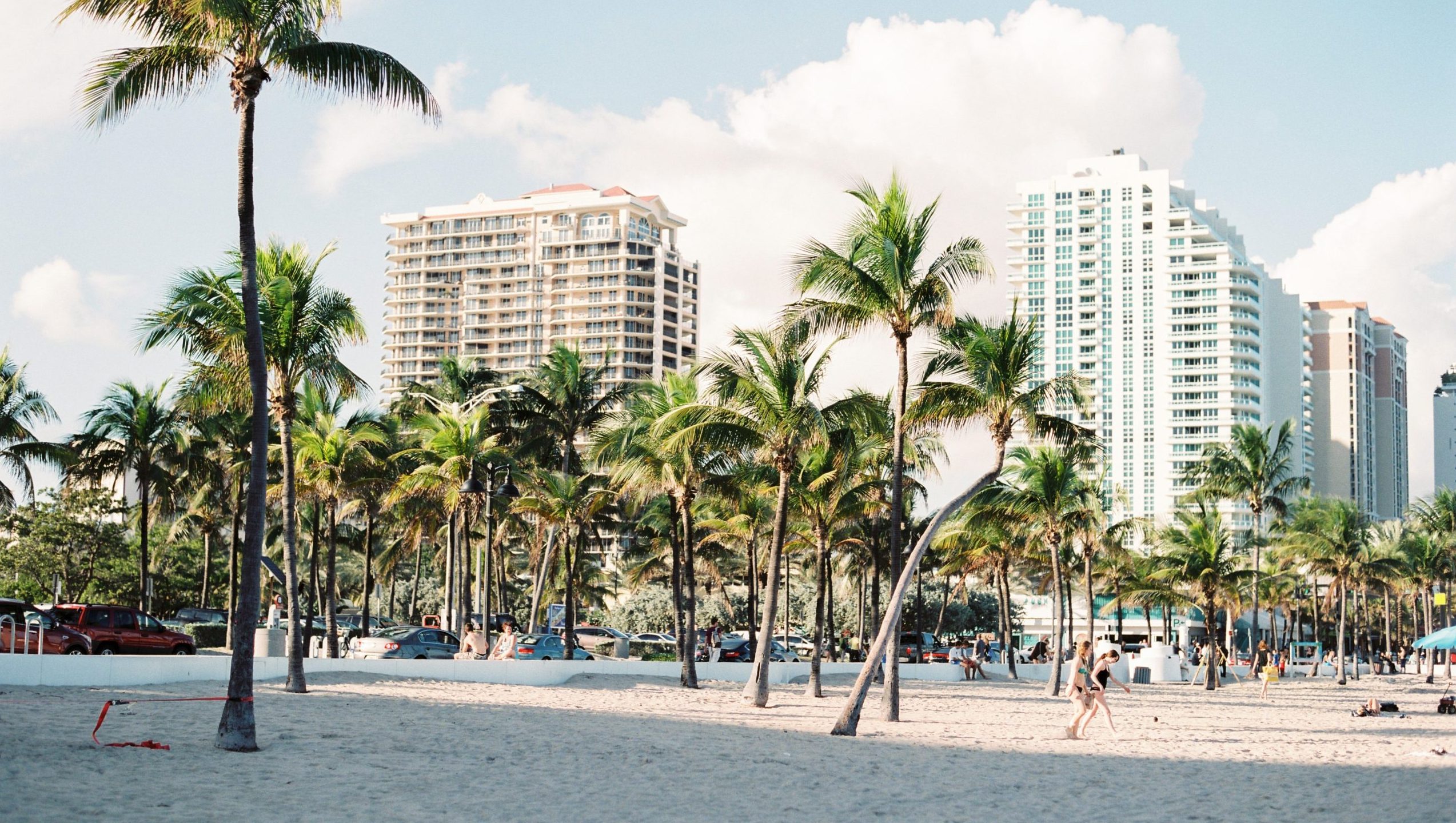 With extremely hot days set to double, even quintuple by 2050 in the Global South, new research quantifies economic and social impacts of heat in cities across the globe. This city report takes a closer look at the impacts of heat on the economy of Miami, United States.
Read More

1  To estimate economic losses, this study goes beyond political boundaries to give a sense of how extreme heat and humidity impact Monterrey’s influence area. Core economic modeling considers the Metropolitan Area of Monterrey. The regional approach is to ensure that analysis covers populations that are central to Monterrey’s growth and urban trajectory.

3  All analysis is based on RCP 7.0 and SSP3 using an ensemble mean of CMIP6 models; see accompanying methodology document for details.

7  The workability analysis is based on climate factors and not indoor working conditions determined by built environment characteristics or workplace layout (e.g., equipment that generates heat, body heat in close spaces, ventilation or greenhouse effects from windows, external shading). In practice, some of these factors can make indoor environments hotter than the modeled climate conditions suggest.

9  Economic data in this report are from 2019 to avoid capturing the effect of COVID-19 on the economies of the cities analyzed; see methodology for further details. All output is measured based on gross value added (GVA), or the value of goods and services produced in an area.